For Sophomore, Kedric Zimmer, last night’s basketball game against Commerce was nothing short of memorable. Kedric broke the school record for the most three pointers made in one game. Before Kedric broke the record, his brother actually held the school record with 8 three pointers made in one game. When Kedric described the feeling he had of breaking the record, he stated that, “It means a lot, especially when my brother was the person I beat. Our competition as basketball players in unlike anything else. It feels surreal that I could beat him and it was definitely a team effort to help me achieve a goal. However, it leaves high expectations for me on and off the court. I need to be a leader, and a role model for my family, friends, and this high school I represent. Our team needs to be different in everything we do, and I’m ready to get back to work and help my team achieve our goals this year.  I can’t thank my team enough. I hit 4 threes the first quarter and knew immediately that I was feeling it. After that, my teammates had there goal and it was to get me the ball and to get me that record. I hope to return these favors to some other guys throughout the year. The way we played as a team was awesome. We had a game plan and stuck to it and it just happened to be my night. Hopefully, this a turning point to the team chemistry and will help our team on both sides of the ball. We are ready to get back to work and prepare for our game Friday.” The game plan for the team changed pretty quickly once the game started. “Last night, we realized he was hot early in the game so we really made it our focus to get him the ball…” says Senior, Griffin Lewis. When I asked the 3 seniors, Griffin Lewis, Chase Daniel, and Cameron Shaw, on the team about Kedric, as a player, they all said the same thing: “ He’s always in the gym improving on his role as a shooter for the team. He really puts in work day in and day out, and he never stops putting in work; I really respect that about him. He has really come around since last year; Kedric has gotten so much better, quicker, and stronger for sure… he is shooting the ball with so much confidence right now…Kedric totally earned it.” 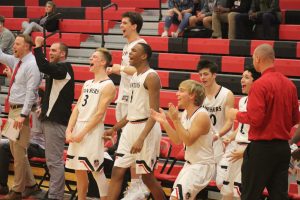