The Panthers took on Hart County and Morgan County last night at Panther Indoor Stadium. The Panthers swept Hart County in the first match of the night, 25-22 and 25-20. The Panthers fell behind early in the 1st set, falling behind 10-4, but then quickly recovered to make a run and put themselves on the front foot, and eventually closed out the set 25-22, after a failed comeback attempt from Hart. The 2nd set was the same song, a strong start from Hart, but an even better job of closing out the set than the 1st set to eventually put Hart County away. 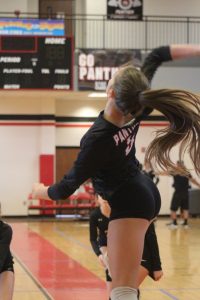 Megan Milian prepares to spike the ball into next week 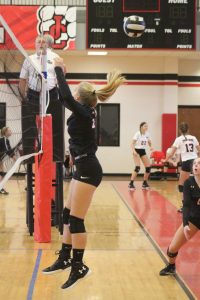 Gracie Herrin jumps in anticipation of a ball coming her way

The match against Morgan County was a gritty hard- fought match to the end. Ultimately, Morgan County came out on top, winning both sets 25-20. The 1st set started with Jackson County jumping out to an early lead, but Morgan started to slowly but surely stage a comeback, eventually winning the set 25-20. The 2nd set started slow for the Panthers, with Morgan jumping out to a quick 9-3 lead, starting the Panthers on the back foot. They clawed their way back to a tie at 16-16, but Morgan county went on a strong 6 point run to set up their victory in the 2nd set, and the match. The Panthers will play a tournament this weekend at Lakeview Academy, and then will have their Senior Night on Tuesday against Stephens County and Westminster Christian Academy.